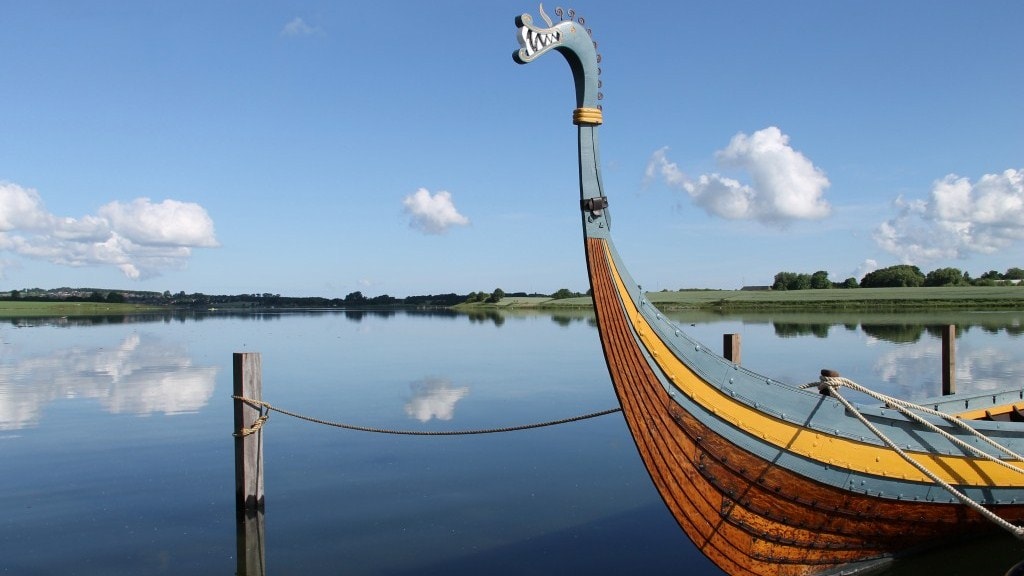 What is the Ladby Ship?
It is Denmark’s only ship grave from the Viking period. Around 925 AD, the king of Ladby was buried in his ship, which was 21.5 meters long and 3 meters wide. A burial mound was raised above the ship. His grave was furnished with all his fine possessions, including 11 horses and 3 or 4 dogs. In the bow of the ship lies the original anchor and anchor chain.

Back in the burial mound, you can see the imprint of the ship, the approximately 2000 rivets that held its planks together, and the shroud rings for the rigging of the mast. In the bow, the original anchor with its chain and the 11 horse skeletons can be seen. The stem is decorated with the “dragon’s mane”, in the form of iron curls. (The originals are on display in the exhibition building.)

In 1935, the ship was unearthed here after more than 1000 years underground. It was excavated by the National Museum  and the pharmacist and amateur archaeologist Poul Helweg Mikkelsen from Odense. He also paid for the construction of a concrete dome over the the ship grave.

The Ladby Ship in a new light
On May 6, 2012, it was the 75th anniversary of the Ladby Ship Museum. We marked the anniversary by giving the old ship a facelift: the old florescent lights were taken down, a new ventilation system has been installed, and the walls have been painted in a dark color to signal that this is a burial chamber. The idea is that the ship, the unique authentic artefact, which still lies where it was placed as a ship grave for the Ladby king more than 1000 years ago, should be the central part of the museum. So let your eyes get used to the darkness and allow yourself the time to see all the fascinating details in the ship.

Activity at the museum
A museum is more than objects behind glass. A lot is going on. A  Viking ship is build and the Ladby Tapestry is sown. In July there are different activities for the children. Visit the museum shop and enjoy a cup of coffee.

At the moment they are building an exact copy of the Ladby Ship using authentic shipbuilding methods. On May 14, 2016, the ship will be launched. Hereafter it can be seen as part of the beautiful natural surroundings at the museum’s boat dock.

The Danish designer Jim Lyngvild will show costumes inspired by the kings, warriors and princes of the Viking era.