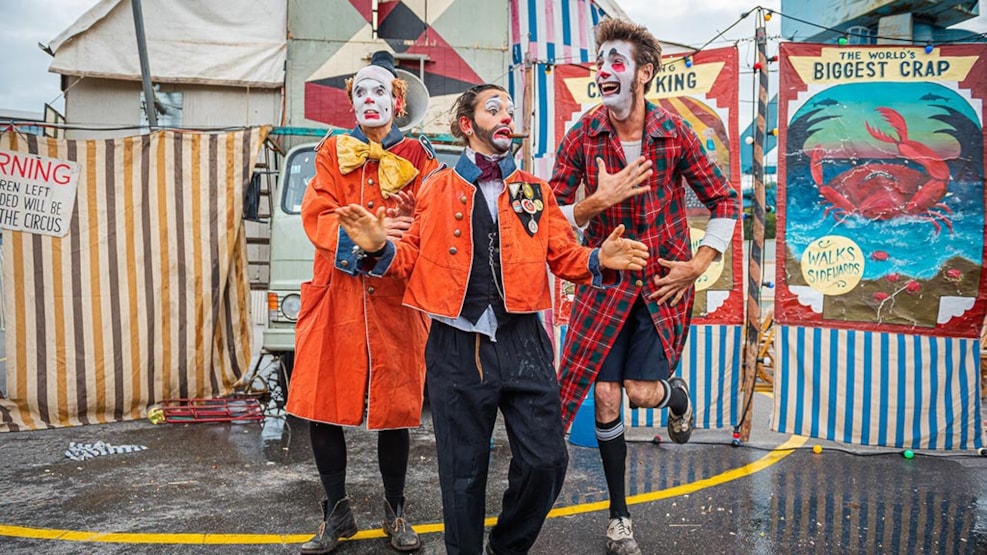 This is the fourth edition of the International New Circus Festival packed with contemporary circus, music, party, community and unpredictable experiences in a tour de force in wildness, poetry, humour and magic.

- a performing arts festival that pays homage to the communal experiences - free from the judgment of arbiters of taste and the tyranny of arbitrary avant-gardists. A life-affirming embrace of the universal: empathy, fear, redemption, joy, euphoria, excitement and loss of control. Together we visit the circus.

- The fourth edition of the International New Circus Festival is packed with new circus, music, party, community and unpredictable experiences in a tour de force in wildness, poetry, humour and magic. Between abandoned silos and industrial buildings at the Port of Odense, cultural life and pale concrete, DYNAMO presents an intense festival that shows the new circus genre at its best.

- A new circus festival must entertain and it must challenge! Therefore, this year's program is filled with amazing new circus performances from home and abroad, overstimulating live music that forces the dance fever into your feet, a late-night open stage curated by none other than Swedish MIGHTY PERFORMING ARTS COLLECTIVE and a film program presented in collaboration with Odense International Film Festival.

When the festival draws to a close and Saturday night is upon us, we give you the usual epic new circus kick in the party balls, which is DYNAMO's "Late Night Cabaret": with national and international artists and electronic live music - this year created and directed by a very special Danish new circus artist, magician and director.

See it as an invitation to a festive journey of discovery with performing arts for the people in focus, when we offer circus workshops, bands, food trucks, local DJs and Odense's best-staffed bar on the square, which surrounds Denmark's wildest circus house. This year, we dig a bit further into the circus culture as the festival expands with a genuine "Big Top Circus Tent" and presents the biggest new circus performance our audience has ever seen.

Inside the circus building, you will find our two smaller stages, a chill-out lounge where you can relax when you take a break from the program, our unpolished punk-tivoli atmosphere with a tattoo raffle, photo-booth and costume box that is always ready to support an epic afterparty.